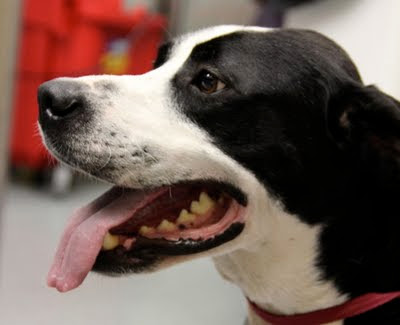 Lucky is a young male mixed-breed dog who was rescued in Los Angeles. The aptly named Lucky found his way into the capable and loving care of Eric Bellows, formerly of Rescue Ink. His most pressing issues at that time were gunshot wounds to his legs. These wounds required multiple treatments, but Lucky persevered bravely through his procedures and was fostered by Eric, whose current rescue organization is called Pack Ethic. However, Lucky's health issues were not yet behind him. In February, Lucky tested positive for heartworm.

In late March, Lucky was brought in for a consultation with cardiologist Dr. Mandi Kleman, DVM, DACVIM, who used a variety of tests including bloodwork, thoracic radiographs (seen below) and an echocardiogram to confirm the diagnosis of heartworms in the pulmonary artery. It is not uncommon for cardiologists to perform heartworm extraction, and the procedure is the only good option for dogs that have heartworms truly within the heart (i.e. caval syndrome). It is a much more common procedure in southern states where heartworms are more prevalent.

The extraction of heartworms from the pulmonary artery is not as common as extraction from the heart, but it is still a great option and sometimes the best option for dogs (like Lucky) with a very large worm burden, or dogs that are having problems like syncope, collapse, bad coughing, tachypnea, etc. Lucky was a quiet dog with an intermittent fast respiratory rate and coughing, but luckily for him he had been strictly rested due to the extensive orthopedic disease which resulted from his gunshot wounds. If Lucky had been able to exercise more and increase his heart rate, he would have suffered more symptoms from inflammation due to the heartworm infestation.

Within a few weeks of Lucky's first visit to CUVS, a generous benefactor volunteered to pay for his heartworm extraction surgery. To prepare Lucky for his surgery, Dr. Kleman prescribed 4 weeks of doxycycline, plus a short, tapered dose of steroids to be given just prior to surgery, and in mid-April Eric brought Lucky in to CUVS for the extraction. Just before administering anesthesia, the CUVS surgical team gave Lucky a dose of benadryl and dexamethasone. All of these drug therapies worked to decrease inflammation in Lucky's lungs, decrease his coughing, and decrease his risk of clinical signs associated with pulmonary thromboembolism.

As heartworm extraction surgery is executed using fluoroscopy and tiny incisions, Dr. Kleman's first step in the surgical suite is to create a small incision in Lucky's neck to dissect down to the jugular vein. This incision becomes the entry point for the surgical tools that are fed down into the patient's heart- in this case, the pulmonary artery on the right side of the heart. Dr. Kleman uses a specialized guiding introducer to position a snare catheter in Lucky's pulmonary artery. The snare catheter catches the worms, which Dr. Kleman grabs with specialized forceps called Ishiharas. The entire surgery is coordinated through fluoroscopy, which is essentially real-time radiographic imaging of the procedure.

As can be seen in the picture above, taken during Lucky's surgery, his heartworm infestation was severe, with many large adult worms present in the pulmonary artery. Without direct surgical intervention by a specialized team, Lucky would have most likely died from complications of his heartworm infestation. Heartworm extraction surgery is a complex procedure which is not without risks: anesthesia in particular poses an additional risk in these cases due to the compromised heart function. Additionally, if the heartworms themselves are lacerated during the course of the procedure, a dangerous anaphylactic reaction can occur. Thankfully, with Dr. Kleman's expert care and steady hand, Lucky's surgery was uneventful. In fact, when Dr. Kleman removed the mass of heartworms from Lucky's pulmonary artery, his SpO2 value (the oxygen saturation level in his blood) jumped from 92% to 99%, indicating that his heart function immediately improved.

After surgery, Lucky stayed at CUVS overnight for monitoring and pain management. The following day, Lucky went home with Eric to rejoin their pack. Lucky and Eric returned to CUVS about two weeks later to continue Lucky's heartworm treatment with an anti-heartworm drug called immiticide. The battle against heartworms is a long one: due to the nature of the worm's life cycle, adult worms give birth to live young called "microfilaria" which circulate in the blood stream. In order to make sure Lucky remains heartworm-free, immiticide is administered in two doses, six weeks apart, to kill the microfilaria.

Heartworm is an easily preventable condition: there are many heartworm preventatives on the market which are available through your family veterinarian. These preventatives are available in the form of chewable tablets or topical liquids, both of which make administering them to your pet very easy. As the saying goes: an ounce of prevention is worth a pound of cure. Please make regular visits to your veterinarian so that heartworm disease is prevented.

Lucky's long journey to recovery was not yet over after the heartworm treatment. Lucky's generous benefactor agreed to fund the rest of his treatment for his lameness, which stemmed from gunshot wounds and abuse. During his two month recovery from the heartworm surgery, Lucky was fostered by CUVS employees and their families until he was strong enough to go back into surgery. Lucky's right front and left rear legs were both painfully and chronically luxated, or dislocated, due to his previous injuries (see picture below). To remedy this, Dr. Alon Kramer DVM, DACVS, recently performed a procedure to implant plates into each leg which will allow stabilization and fusion of the affected joints (on both legs, it was the lower joints which were affected).

While these procedures sound straightforward, due to lucky’s chronic injuries they were complex and challenging. Dr. Kramer stabilized both limbs in one long operative procedure. On each limb, he needed to dissect the site to allow re-alignment of the chronically dislocated joints, excise and remove the lining of the joints, pull tendons aside, rigidly stabilize the joint and associated bones and insert bone grafts. Dr. Kramer affixed custom-shaped arthrodesis plates to the joints with specialized screws. The grafts will permit the bones to fuse together to fix each of the affected joints in place. The joints will no longer move, but even so, they will become more useful and functional for Lucky and allow him to use each leg again. Finally, after closing the surgical sites and bandaging the legs, Lucky got two prefabricated splints to stabilize the surgery sites during recovery.

The remainder of Lucky's journey, which is ongoing at the time of this post, involves six to eight weeks of rest, bandage changes, pain medications and a lot of love showered upon him by employees of CUVS. At about eight weeks, Lucky will have follow-up radiographs which will show Dr. Kramer the progress of Lucky's healing.

Lucky is indeed an extremely lucky dog: not only was he rescued, but he was cured of his serious heartworm infestation and his orthopedic injuries with the advanced science available only at a world-class animal hospital. Lucky's journey required the care and love of an entire community of animal lovers: from Eric and the animal rescuers he works with, to Lucky's amazing benefactor, to the caring employees of Cornell University Veterinary Specialists. All generously gave their kindness, skill, care and love to this dog who needed it so badly. And after a life which started off with so much pain and abuse, Lucky has finally found happiness in his forever home with a CUVS employee.

Please visit the website for Eric Bellows' Pack Ethic organization. You can read more about Lucky and the rest of the rescued animals from Eric's point of view.

I am honored to know Laura for many years and so proud of who she is and what she has become!!

I never knew the whole story of Mica! When her stomach twisted right before Christmas, I am so glad that we all were able to help her and get her well again to continue your adventures together, with your CUVS family by your side now of course!

What a wonderful story and exactly what I would expect Dr Hackner to do. I will never forget the care Dr Hackner's gave to my beloved Turpsy over a very long, awful weekend.